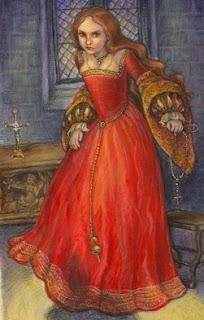 This is a project about demonic ladies, iron maidens and evil queens. It's the opposite to my "Golden Girl Project" series that I made years ago on this blog. Golden Girls is all about ladies of light. The Gloom Girls Project is about ladies of darkness. Obsidiously evil and dangerous by nature, they're cold blooded as they're so vicious, tainted and cruel. Each post will focus on one such lady of gloom. Bloody Mary

The urban legend of the Bloody Mary is like this: Late at night, the witching hour, light a single candle and look into the mirror. Say the name "Bloody Mary" three times, and the reflection in the mirror will be of her. This ritual has been done by groups of people. They claim to have seen Bloody Mary appear in the mirror just after saying the name three times. Bloody Mary looks like a corpse. Some say that she appears like a woman covered in blood. It's said that this ghost of Bloody Mary can scream or attack people through the mirror.
Where does all this come from and who is Bloody Mary?
There was a real "Bloody Mary" in history, She was Queen Mary I of England, born on February 18th in 1516. She was Mary Tudor, the daughter of Henry VIII and Catherine of Aragon. She was the sister of the fiery and vivacious Elizabeth I and also cousin of the stunning Mary Queen of Scots. Mary I of England must never be confused with Mary Queen of Scots as these were two different women. Mary I was considered "plain" by comparison of the other queens, but she had a very strong bloodthirst. She expressed her angry will in persecuting Protestants by having them killed.
She had talents in music and singing, but was always living under a cloud because she was a bastard child and had restrictions. She married Phillip II of Spain. Mary became a queen at 37 years of age, through loopholes and after she brutally removed and killed the beautiful "9 days queen" Lady Jane Grey.
At the time of her ascension to the throne, the public loved her. She became queen and was soon desperate to make England a Catholic country. She executed people. Their bodies were displayed for all to see, as birds pecked on the corpses eyes and flesh. She encouraged people to join her in a war, that turned on its head, resulting in slaughter by the thousands. She executed 300 of her own people during her campaign against heresy and war against Protestantism. She was a terrible ruler and a mass murderess. This gave her the name "Bloody Mary". She became a truly horrible and hated queen.
Throughout her life, Mary suffered miscarriages. But her violent urges gave her a quick hateful reputation. Mary I died in 17 November 1558 of cancer. Lack of an heir made the next in line to the throne Elizabeth, her sister, who righted the wrongs that the queen Bloody Mary did. There is a well known nursery rhyme about Bloody Mary.
"Mary Mary
quite contrary
how does your garden grow?
with silver bells and
cockel shells
and pretty maids all in a row".
Posted by Rayne Belladonna at 06:45
Email ThisBlogThis!Share to TwitterShare to FacebookShare to Pinterest