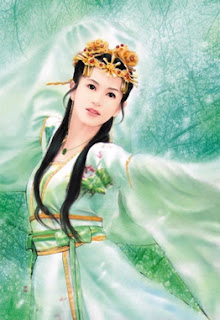 This is a project about ladies, maidens and queens who are just pure evil. It's the opposite to my "Golden Girl Project" series that I made years ago on this blog. Golden Girls is all about ladies of light. As with the "Golden Girls", although I shall focus on real historical figures, some won't be. Each post will focus on one such gloomy girl.

There were orphaned twin sisters who lived during the Han Dynasty. The sisters were called Zhao Feiyan and Zhao Hede. Emperor Cheng had a sister named Princess Yang'a who wanted to keep the twin girls and she employed them to work in her house. She gave them food, clothes and even school lessons in dancing. Both twins were talented at dancing and they were graceful as well as enchanting. They became beautiful as they approached womanhood. Princess Yang'a named the most slender, swiftest and enchanting sister "Flying Swallow". When Feiyan danced, she was so light that it seemed as if she was moving through air. One day, Princess Yang's invited her brother Cheng to visit the house. When he saw Zhao Feiyang the "flying swallow", he fell under a spell and wanted to keep her for himself. So this was how the teenaged girl Zhao Feiyan became the girlfriend and concubine of Emperor Cheng.
He loved Zhao so much that he awarded her the title of Jieyu (Lady of Handsome Fairness). In the Chinese harem, there was a ranking system for all of the concubines but the ranking system altered throughout the ages in different places. During the Han Dynasty, and all of the others, the Empress is alone at the very top of the rank. The others, including madames and other imperial concubines were given their own titles and positions.
Emperor Cheng had a crystal plate made for Zhao Feiyan to dance upon. When she did, her graceful moves impressed all those who watched her. She performed for everyone in the palace and gained popularity and fame as the Crystal Dancer. Much anger, resentment, jealousy and bitterness occurred amongst the other concubines who grew to hate Zhao Feiyan.
One day, Zhao Hede was invited to visit her sister and then she was made a concubine by Feiyan, to support her and help back her up against jealous rivals.
The Emperor found Feiyan's twin sister beautiful and fuller with curves. He loved both sisters so much that he lost touch with his own duties. Both sisters conspired to get rid of Cheng's wife, Xu, and they each created a malicious set up against the Empress Xu and accused her of witchcraft. The lies made by the twin sisters caused the downfall of Empress Xu and Consort Ban. Both Xu and Ban were deposed. Zhao Feiyang became empress.
The two sisters were both so beautiful that the Emperor forgot about the world, lost touch with reality and as a result of this, the country fell into chaos. The girls were not able to have children and they hypnotised this most powerful man into becoming selfish, who was only nterested in having fun and pleasure seeking. While both sisters continued to dance, they were stressing about not getting pregnant. Other concubines who became pregnant were met by "nasty little accidents" by the sisters. The fable "The swallow pecks at the emperor's offspring" comes from the time of the dancer and empress Zheo Freiyang who took her malice out on other concubines and their babies.
Emperor Cheng died and some believe it was caused by Hede who might've poisoned him. After his death, his oldest son Ai became the emperor and he made Zhao Feiyan the "queen mother". When the new emperor Ai died, his grandmother made her nephew Wang Mang the emperor. Emperor Wang Mang changed the status of Zhao to that of commoner.
At the age of 31, Zhao committed suicide.

Written by Rayne
Posted by Wolf Girl Night at 22:36
Email ThisBlogThis!Share to TwitterShare to FacebookShare to Pinterest