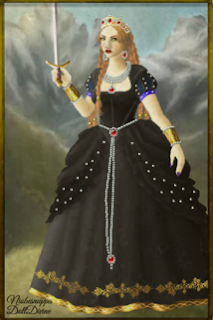 This is a project about ladies, maidens and queens who are just pure evil. It's the opposite to my "Golden Girl Project" series that I made years ago on this blog. Golden Girls is all about ladies of light. As with the "Golden Girls", although I shall focus on real historical figures, some won't be. Each post will focus on one such gloomy girl.

A girl called Irene who entered a beauty contest and became a Byzantian empress. The life of Irene Sarantapechaina began with her birth in the year 732 CE. This orphan girl was raised by her uncle who was a noble in Athens, Greece. At the age of 17, Irene was invited to a beauty contest, or basically as it was really, a royal ceromony for Prince Leo to choose a bride. Many young women were attending with their families and during this wealthy beauty pageant, Leo found Irene of Athens to be the most beautiful of them all. He selected her to be his bride.
Irene was happy to be chosen by the prince. Leo and Irene were soon married. At the age of 19, Irene gave birth to a son, called Constantine VI. Soon after his father died, Leo became the emperor. Irene was his empress. Some rumours went around that the former emperor was poisoned. Some years later Leo died. To this day his death remains unknown.
The 8 year old boy Constantine VI became the new emperor.
His mother Irene was regent and ruled on his behalf. She was very harsh and brutal.
When Constantine grew to a young man, so many marriage proposals flooded in from everywhere. But Irene was threatened by any future daughter-in-law stealing her powers so she organised an end to any marriage proposals for her son.
Many officials wanted Constantine to gain independance from his controlling and tyrannical mother. Constantine was still always unable to rule without Irene. He needed his mother. Irene hated that people tried to remove her power as a regent and made her son swear an oath of allegiance to her alone.
Still upset by her son rebelling against her, she plotted to have him deposed for conspiracy. Once Constantine was arrested and tried for these false allegations of conspiracy, he was not able to defend himself or show proof otherwise. The judge found him guilty of conspiracy and Constantine was punished in the most severe way. His eyes were taken out and he soon died.
Irene was now the empress and she ruled terribly until her death.
End
Written by Rayne
(The picture used on this post is "Irene of Athens" made by Rayne.)
Posted by Wolf Girl Night at 04:02
Email ThisBlogThis!Share to TwitterShare to FacebookShare to Pinterest