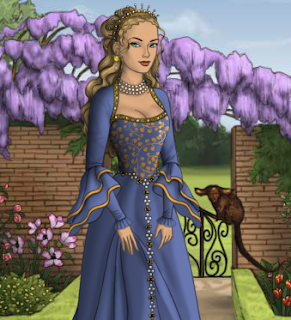 One of the most beautiful yet infamous women in history is the character named Lucrezia Borgia. She looked physically angelic, innocent with a pretty smile and tumbling curls, her flowery laughter and elegant manner. Yet people actually feared this woman. Why?
First of all, she came from a powerful and notorious family. This made her untouchable as well as immune to any justice. Her own family had a dark and brutal reputation that put everyone in the public on caution of getting in their way.
Lucrezia had a streak that made servants afraid of her, not to mention her access to poisons, how she didn't care about using it. Not only did she threaten to kill people, she killed people, and this made her frightening as well as cold and deadly. People could tell that she was capable of anything. She bullied anyone who wasn't as rich and powerful as her. Lucrezia had an image of being cruel and promiscuous. Her antics were considered evil and she was involved in orgies and incest.
Daughter of the corrupt and sinister Pope Alexander VI, formerly named Cardinal Rodrigo Borgia. Lucrezia married Giovanni Sforza but her husband was targetted to be assassinated by the king of France who was allied with Giovanni's uncle, Ludovico the Duke of Milan. The marriage failed, was anulled and Lucrezia was sent off to a convent.
After three years she married Alfonso of Aragon. An attmpt was made on his life and this injured him, but Lucrezia nursed him. Alfonso was soon murdered, by Cesere, brother and lover of Lucrezia. It was rumoured that she had an illigitimate child with her brother. Their incestouous relationship was known. Later Lucrezia married a Duke of Ferrara. She later died of childbirth at the age of 39.
Although her life was only brief, it was filled with scandal and insanity. The feelings that this girl projected onto others, mostly to make people frightened of her, gave her a sordid and grim reputation. She's gone down in history as a girl that is both beautiful, young and from a sinister family.

The above picture is of Lucrezia Borgia made by me Rayne  using Azalea's Dolls
Posted by Rayne Belladonna at 21:06
Email ThisBlogThis!Share to TwitterShare to FacebookShare to Pinterest