The fear of ghost girls in horror 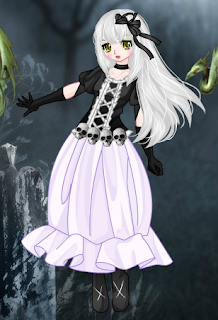 It seems a pattern in films. It’s said among people that ghost girls are regarded as “creepier” than other ghosts. Girl ghosts spook people more than headless horsemen do. The latter, headless horsemen, looks sillier than how people used to feel about them. People used to be scared of ghosts wearing white sheets and rattling chains. We don't encounter this much now. Do we?
There was a time when ghost girls were often reminded of dark “fairies” and the antagonist females in the folklore legends. These feared girls often appear as to people as omens of doom and death, like the Banshee, Rusalka, Rhine Maidens, elf women of Scandinavia, sirens, succubus, harpies, Morrigan, (reaper maidens) Valkyries, nymphs, mermaids, Amazons, Kitsune, ect. All these mystical and paranormal girls have been part of legends and folklore for ages.
There is something to be said about creepy girls or creepy girl ghosts, in horror and myths, whether or not they’re spirits of the dead, or simply creatures of the night, goddesses or just dark spirits. Supernatural girls frighten people a lot more than you think as the human psyche is full of fear from tales we were told as small children.
Ghost girls have been associated with death for thousands of years. In Neil Gaiman's fictional world of the "Sandman", a girl is named Death and she is death itself. The visions of the ghostly twin sisters in "The Shining" and the demonic Regan girl in "Exorcist" have a lasting impression or scarring on the mind to many. So this could be why girl ghosts are popular and frightening in films. Just my two pence!

Read more on this subject:
Why women make the scariest ghosts
Top 10 Creepy Girls in fiction
Girls in Horror

The original post was made by me on Quora, by Rayne Belladonna. Some parts of this post on my blog have been slightly edited to correct spelling and add more stuff.
The top image is "Creepy Girl" made by Rayne, using Dress Up Games.
Posted by Rayne Belladonna at 03:52
Email ThisBlogThis!Share to TwitterShare to FacebookShare to Pinterest