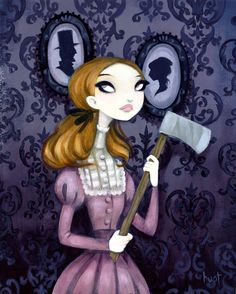 Lizzie Borden took an axe
And gave her mother forty whacks.
And when she saw what she had done,
She gave her father forty-one.

The above is a rhyme doggerel that children can sing and remember. It was created out of thin air in the year 1893, the time of Lizzie's trial. Who was this Lizzie Borden and why is there a strange creepy song about her?
Lizzie was born on 19th July 1860 in Fall River, Massachusettes. Her father, Andrew Jackson Borden, was from a respectable family but he had financial difficulties. He ended up working in the furniture business where he did better and provided for his family. He later turned to property and managing, seeing over various factories and manufacturing. He was raised as a president of a banking company, and his salery grew and his estate reached a value of over two hundred thousand dollars. Andrew's friends and relatives were of the trend setting and gentlemen and lady types. They found Andrew somewhat shabby as he didn't live their wealthy lifestyle.
His house was like a haunted house. It was a grey walled house, three storyes high, filled with rooms and secret passages, surrounded by a white picket fence and a spooky tree stood just outside the front. It had a terrible plumbing system and decay. Today, that house still stands there but it's been redourated, painted green and there are more flowers growing in the yard turned garden. It's now a B&B.
Growing up, Lizzie was playing with her older sister, Emma, within the crumbling house. Their strict stepmother, Abby, wanted both to have a religious upbringing. They attended church and other Christian groups. Lizzie went to Morgan Street School. According to her school friends and teachers, Lizzie spoke unkindly of her stepmother. However, people remembered Abby as a kind sweet lady. It seems clear that of her school reports, Lizzie didn't do too fantastic but not bad at her achievments. She also didn't get on well with others. Described as a small "blooming strapping lass", with brown hair and such cold eyes.
Some former school buddies remember her as a loner and "sarcastic" who kept one friend. After Lizzie grew up, she became a secretary and a member of the Fruit and Flower Mission. Around the time of the infamous event, everyone had become ill. On 4th August 1892, Lizzie picked up an axe and then killed both her father and stepmother. Abby was given 18 or 19 whacks of the blade, while Adrew got 11 hits. Some believe that she didn't do it. However, during police investigations and interviews, Lizzie changed her story. Despite her notorious media character, she was acquited. The mystery is still ongoing.
After the trial, Lizzie was caught shoplifting and arrested. She was made an outcast but later befriended a celebrity called Nance O'Neil, who introduced Lizzie to parties and a wild flamboyant lifestyle. Lizzie became ill and died on 1st June 1927. She left a Will and $500,000 went towards an animal shelter and the rest towards her remaining relatives.

By Rayne
Art by Krista Hout

Posted by Rayne Belladonna at 12:10
Email ThisBlogThis!Share to TwitterShare to FacebookShare to Pinterest