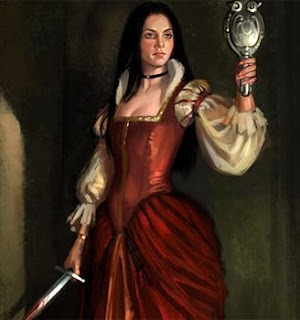 The most famous evil lady was none other than Countess Bathory. Everyone who's heard of her will tell you that she soaked in the blood of virgins to keep herself looking young and beautiful. She's known as the bloody countess, blood countess and Countess Dracula. Who was she?
Countess Bathory was born Elizabeth Bathory in Nyirbator, Hungary, on 7th August 1560. Her family owned land in Hungary and Transylvania. The sinister coat of arms of Nyirbator shows a green land background with a golden sheep wearing a golden flag, standing on a monstrous red claw with sharp talons. The Bathory coat of arms show jagged three red and three white fangs. Elizabeth's coat of arms is of a green griffin sat upon a pair of giant dragon's teeth.
As a little girl, she was raised in Ecsed Castle, now a ruin today. In her teens, she had a close friendship with a local peasant boy and got pregnant.The baby was given away to a peasant family in Wallachia. She was married off to Ferenc Nadasdy, but Elizabeth wanted to keep her name "Bathory" as she didn't want her husband's name. The entire marriage was arranged and political, not based upon love. The wedding was extravagant with thousands of guests. There was a great feast, where planty of food was served including wild pig, venison, swan, peacock, duck, fish and ox, all stuffed with fruits and herbs. Roasted vegetables, fresh bread, wines and honeyed sweets. There were plenty of musicians, as well as court jesters and their trained dogs and monkeys performing tricks. Soon, Elizabeth had to live with her husband in Nadasdy Castle. Such a castle looked like something straight out of a fairytale with cream coloured walls and sky blue turrets. It still stands there today.
Elizabeth found herself alone because her husband often went away. During this time, there was war against the Ottomons, and Elizabeth had to run the estate and deal with internal politics. It was where she started developing materials on making blood magic. She was vain and obsessed with her looks. Fair light skin, dark raven coloured hair that tumbled down, she had an hourglass figure, large pale grey eyes with long lashes and blood red ruby coloured lips. Her beauty was like the Snow-White princess of stories but when she smiled, all of her teeth were sharp as daggers.
Over the years with her husband's coming and goings, Elizabeth had given birth to four children. Her husband became unwell and died at the age of 48 years old. Once he was gone, Elizabeth took control of everything and expressed her dark powers as a frightening blood countess that made her a legend.
Soon Elizabeth was being questioned by authorities. Investigations were carried out after many disturbing reports about her made by a variety of people from many backgrounds, rich and poor. A lot of young women and girls were disappearing around the land, daughters of poor farmers and daughters of rich people. Many indicate that something sinister was going on. These girls were reportedly taken to Elizabeth's castle, with the promise of work as hand maidens, but ended up physically abused and tortured to death. It was said that Elizabeth carried out these cruelties in Cachtice Castle, that she owned. That skeleton castle on a hilltop had been a wedding gift to her. Corpses were found half buried, and unmarked graves full of the victims of young women who died from such cruel methods. Some had said Elizabeth drank human blood and ate human flesh.
When Elizabeth was arrested, she was caught then and there in the horrible act of torturing a woman. There were bodies of dead women throughout the castle. Living women were found crying after just being tortured. There were sobbing women locked up in tiny dark cells infested with rats and feaces.
She was put on trial and imprisoned. Eventually Elizabeth died in a cell room, and was buried at Ecsed originally but her body was moved a couple of times since and the whereabouts of Elizabeth's remains are unknown.


Posted by Rayne Belladonna at 09:40
Email ThisBlogThis!Share to TwitterShare to FacebookShare to Pinterest