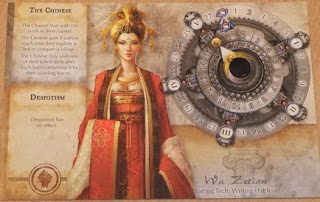 This is a brand new project about demonic ladies, iron maidens and evil queens. It's the opposite to my "Golden Girl Project" series that I made years ago on this blog. Golden Girls is all about ladies of light. The Gloom Girls Project is about ladies of darkness. Obsidiously evil and dangerous by nature, they're cold blooded as they're so vicious, tainted and cruel. Each post will focus on one such lady of gloom.


A true life wicked queen of “Snow White” we have Wu Zetian. Wu Zetian is the only woman to rule the empire in China. Alive during the Tang Dynesty, she started off as a concubine to Taizong and when he died, she married his son, Gaozong. When he died, she then killed her own sons to remove them from the throne. With her sons gone, she became the ultimate power. It’s believed that she had her own daughter murdered and framed another called Lady Wang.

The first woman to sit on that throne, but as soon as she took to the throne, an earthquake happened. People saw it as an omen of doom. Then after this disastrous earthquake, a mysterious mountain appeared. Pople saw this as nature rising up against the dark queen empress. However, Wu regarded it all as a wonderful signs from divinities.

She had Lady Wang and others butchered by cutting off their hands and feet and drowning them in vats of wine. She altered the name from Tang to Tianzhou. All family members of former Tang leaders put away in dungeons and had herself deified (making everyone believe she was the incarnation of a Meitreya Holy Spirit). She had statues of Meitreya carved to resemble her face. This woman altered government and the writing system. She placed many reforms into the country from schools and police, agriculture and taxation.

She reopened the Silk Road after it had been closed for a long time because of the plague. As time went on, the more paranoid and withdrawn she became. She had a host of adonis men, which everyone saw as entirely flawed in her character. Wu executed anyone that questioned her or criticised her. As a result of this insanity, a large number of her own administration shrunk. She had just very few supporters and spent time with a few men, but herself lost in drugs and aphrodisiacs. Eventually she had the closest to her killed. Soon she wasn’t fit to rule and then her exiled son, Zhongzong, took the throne. Its said she died of ill health soon after.

(copied and pasted from Wu Zetian on Quora, written originally by me, Rayne Belladonna)

The Portal of Golden Girls Project here (soon)
Posted by Rayne Belladonna at 21:13
Email ThisBlogThis!Share to TwitterShare to FacebookShare to Pinterest