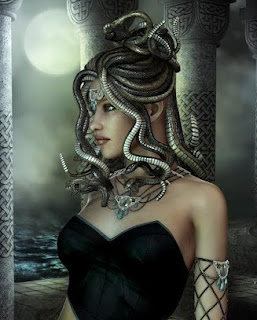 This is a project about demonic ladies, iron maidens and evil queens. It's the opposite to my "Golden Girl Project" series that I made years ago on this blog. Golden Girls is all about ladies of light. The Gloom Girls Project is about ladies of darkness. Obsidiously evil and dangerous by nature, they're cold blooded as they're so vicious, tainted and cruel. Each post will focus on one such lady of gloom. Medusa

This once beautiful priestess did the bad thing and seduced a god in Athena’s temple. So enraged and offended was Goddess Athena that she struck down Medusa. Turning Medusa into a monster with slithering snakes for hair and a serpentine or (some versions) crocodilian body.


Despite her cruel features she had the ability to kill. She was a weapon. Armed with snakes, venom and powerful eyes that can turn anyone to stone if looking at her. She also used weapons from dead warriors. Everyone feared her. She was the most dangerous woman in the world.

Perseus the demigod hero chopped off her head while she was sleeping. Medusa’s blood was so poisonous that wherever it dripped, snakes appeared. Perseus rescues princess Andromeda using Medusa’s head as a weapon, by turning giants (titans) and monsters into stone.

Finally Perseus gives Goddess Athena the head of Medusa.She casts it onto Her blazing gold shield and carries it with Her. Even in death, Medusa is still bad.

(copied and pasted from Medusa on Quora, written originally by me, Rayne Belladonna).
The Portal of Golden Girls Project.
Posted by Rayne Belladonna at 03:09
Email ThisBlogThis!Share to TwitterShare to FacebookShare to Pinterest