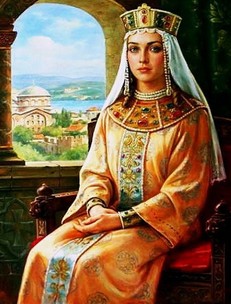 A woman has never been so vicious and yet revered by the Church like an angel as Olga of Kiev. When a person that lived in her time heard her name, they fled to the hills. But given a sainthood that she was but she was far from being a sweet angelic saint. She was a demon.
Olga was born in Pskov, Russia, sometime during the late 9th Century CE. Her family were Varangians, a Viking people living in Russia. Little else is known of her childhood. As a teenager, she married Igor I of Kiev, son of Rurik. Olga and Igor had children togaether. Igor was butchered by the Derevlians, a Slavic tribe, and his son, Sviatoslav I of Kiev, became his successor. Sviatoslav was very young and his mother, Olga, was regent until her son was turned of a certain age. Olga wanted revenge.
She pretended to look for a new husband and requested that Derevlian men show up.These men would be treated with much dazzling kindness, they would be given food and rich clothes, and arrive to the castle in splendid little boats for each man. Olga had her own people dig a deep trench in the main square of the city. After the Derevlian men arrived sailed into Kiev, they were met by people who carried them in their boats across the streets. Then the Derevlian men were flung into the deep trench, and were buried there alive.
Olga needed to visit Dereva and requested an escort. She wanted the Derevlian Prince Mal to send some of his best warriors to escort her. After the Derevlian warriors arrived, Olga insisted that they bathe themselves before meeting her. The men were escorted to the bath house. Then they were locked inside and Olga had the bath house torched and burned. All the men inside were killed.
Olga needed to pay her respects to her late husband so she went to Dereva's city Iskoresten. Upon her visit, a party was held in her honour with a great banquet. She gave out the finest of alcoholic drinks. Those at the banquet were Derevlian warriors and they all became extremely drunk. So drunk were they that Olga had them all slain.
Olga made war with the Derevlians. Her forces were powerful and the citizens of Derevlia were suffering far too much hunger. Olga wanted each household to send three sparrows and three pidgeons to her, so the Derevlian people agreed. They were wanting to end their pain and misery and succumb to Olga, wanting to please her so that she would be their queen regent. What Olga did next was have her armies attach sulfur dipped rags onto each bird, and have each one lit. The birds returned to the houses where they had nests. By then, the birds were on fire and every house burned to the ground, killing people inside. The next thing she did was visit Constantinople and there she converted to Christianity.
Olga is now a saint.

Posted by Rayne Belladonna at 06:00
Email ThisBlogThis!Share to TwitterShare to FacebookShare to Pinterest